Infosat began as a small wholesale company specializing in satellite communications hardware. It was the first in Canada to provide satellite-based telephony, fax, and data solutions to the private sector, and also designed and commissioned Canada’s first digital audio mobile satellite link. The turn of the decade saw Infosat extend it services outside of North America for the first time, such as its successful projects in Southeast Asia (C-Band transceiver in Indonesia, 1st private X.25 network in Malaysia). Other projects included video uplink installations for the Province of British Columbia’s Legislative Assembly as well as the Knowledge Network (Open Learning Agency).

This period of time saw Infosat evolve from a small wholesale company to a company with a larger North American presence for mobile satellite solutions. It became a National Service Provider for MSAT products and services and was selected by Mobility Canada to manage the MSAT program across Canada. Infosat was later selected by Iridium Canada to be the exclusive dealer of Iridium solutions in Canada. With Teleglobe, the company launched Demand Assigned Multiple Access (DAMA) before being acquired by BCE Media Business Solutions in 1999.

As Infosat’s mobile satellite solutions continued to thrive, the company began actively pursuing opportunities for fixed and transportable applications. After Infosat was acquired by Telesat in 2001, doors were opened to allow for greater exposure into industries such as Oil and Gas, Mining, Forestry, and Government. With the growing demand for satellite technology by these markets, Infosat has taken full advantage by introducing high-speed broadband satellite Internet services to businesses and enterprises who seek a “total communications solution”. Infosat takes pride in its ability to customize a solution that is unique and appropriate to any size operation.

To further its growth and market share, Infosat acquired Quick Link Communications (QLC) in 2003, ACA Security and Audio Visual in 2005, Able Communications (Houston, Texas) in 2006, and made an investment in Comstar ISA Ltc. (Karachi, Pakistan) in 2006.

Infosat currently manages the world’s largest iDirect network through its Connect solution, and remains one of the largest MSAT service providers. Infosat also employs a Network Operations Centre which operates 24/7 to serve our clients’ needs.

In 2007 Infosat relocated it’s head office. The move from Coquitlum, BC to Calgary, AB was undertaken in order to create a “Center of Excellence.” By combining the functional units (Engineering Services, Operations, and Account Management) of Infosat’s team under one roof, customers experienced the benefits of Infosat’s newly centralized team.

Infosat continues to invest in high performance, innovative, next generation networks. In 2010 Infosat signed an agreement with Hughes Network Systems to provide enterprise services on their Spaceway platform. Additionally, Infosat’s iDirect networks have expanded covering most of the globe; providing Infosat with the facilities to offer our customers access to our international teleports facilities such as the one based in Fuchsstadt Germany.

Adapting to evolving market conditions and demands; Infosat continues working toward solidifying our position as a dominant provider of enterprise broadband and mobile data and voice services in North America and across the globe. Whether it is a man down application, an asset tracking solutions, Infosat’s highly robust backbone connectivity for the utility sector, a transportable solution, or critical data link, Infosat has created an enduring reputation as the satellite communication provider that has delivered on our promises in some of the most hostile locations on the planet. 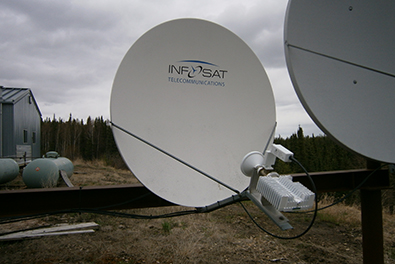 Infosat - Over 25 Years of History in Satellite Communications

Today’s Infosat looks much different than the Infosat that was founded in Coquitlam, BC in 1986. With nearly 70 employees across Canada and the United States and the support of an independent satellite operator, Telesat Canada, as Infosat’ parent company; Infosat is able to approach the provision of our satellite communication solutions from a position of strength and experience on all fronts.

Since 1986, Infosat has been designing, integrating, and commissioning telecommunications systems for a variety of industries and business sectors. Our clients include some of the world's most prominent resource companies, network operators, engineering, procurement and construction (EPC), and government agencies.

Our continued growth and success will be measured by our unparalleled experience and technical capability, devotion to customer service, and business integrity.

We use cookies on our website to give you the most relevant experience by remembering your preferences and repeat visits. By clicking “Accept”, you consent to the use of ALL the cookies.
Do not sell my personal information.
Cookie SettingsAccept
Manage consent

This website uses cookies to improve your experience while you navigate through the website. Out of these, the cookies that are categorized as necessary are stored on your browser as they are essential for the working of basic functionalities of the website. We also use third-party cookies that help us analyze and understand how you use this website. These cookies will be stored in your browser only with your consent. You also have the option to opt-out of these cookies. But opting out of some of these cookies may affect your browsing experience.
Necessary Always Enabled
Necessary cookies are absolutely essential for the website to function properly. These cookies ensure basic functionalities and security features of the website, anonymously.
Functional
Functional cookies help to perform certain functionalities like sharing the content of the website on social media platforms, collect feedbacks, and other third-party features.
Performance
Performance cookies are used to understand and analyze the key performance indexes of the website which helps in delivering a better user experience for the visitors.
Analytics
Analytical cookies are used to understand how visitors interact with the website. These cookies help provide information on metrics the number of visitors, bounce rate, traffic source, etc.
Advertisement
Advertisement cookies are used to provide visitors with relevant ads and marketing campaigns. These cookies track visitors across websites and collect information to provide customized ads.
Others
Other uncategorized cookies are those that are being analyzed and have not been classified into a category as yet.
SAVE & ACCEPT